The NDC kingpin insists that Mr. Agyapong, the Member of Parliament for Assin Central Constituency in the Central region, has defamed him in public by labeling him (Yammin) as a ‘killer’.

Mr. Yammin, a former Deputy Sports Minister, has, therefore, dragged Mr. Agyapong to court, to file charges against him in order to clear his name.

Below is the suit: 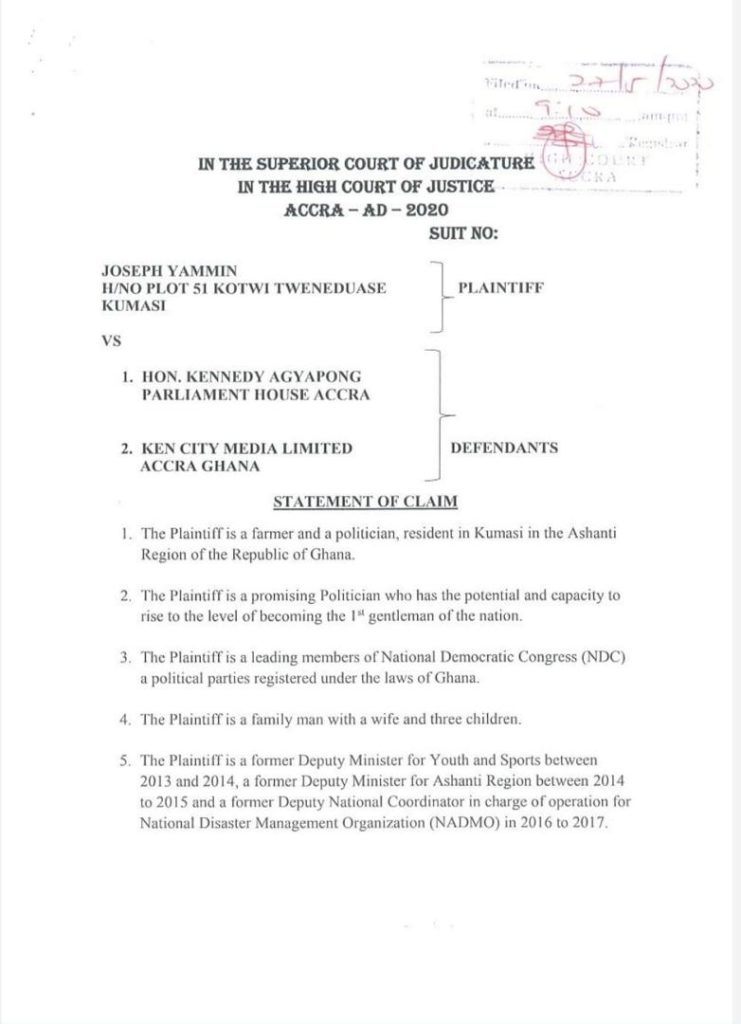 Founder and Leader of Anointed Palace Chapel, Rev. Obofour real name Rev Kwaku Agyei Antwi has replied law-maker Kennedy Agyapong over his threats on Net 2 TV that he shall be exposing fake prophets.

So far, Agyapong is dealing seriously with Bishop Obinim to the extent that he has caused his arrest by the Ghana Police.

Well, Rev.Obofour in a new video says Ken Agyapong shouldn’t try that rubbish on him or else he’ll deal with him in a way he wouldn’t ever forget.

Obofour said as a ‘matter-of-factly’ that he’ll deal with Ken physically and spiritually so if he (Ken) thinks he’s strong, he should just dare him and he’ll see where the power lies.

What sin have we committed for you to treat us this way? –…

Jane Naana should compare herself with NAPO and not intelligent…

Because of Akufo-Addo Ghana now has a VW assembling plant

Kotoka Airport NOT sold; we are partnering for expansion –…

What sin have we committed for you to treat us this way? – Kwesi Pratt laments to Akufo-Addo

Because of Akufo-Addo Ghana now has a VW assembling plant

Kotoka Airport NOT sold; we are partnering for expansion – Aviation Ministry

If Akufo-Addo who managed A SMALL LAW FIRM is President, why not a former Vice-Chancellor? – Manasseh asks